The movie Quadrophenia is a 1979 British drama film loosely based on the Who´s 1973 rock opera double album of the same name.

The Who does not appear live in the movie, and it is not a musical in the way its predecessor Tommy was.

The film Quadrophenia stars Phil Daniels as the main character Jimmy, a young working-class mod who detests his boring job as a post room boy and ditches it for a world of partying, drug use, romance, scooter riding and engaging in fights between mods and rockers. The movie is set in London and Brighton in 1964.

Several discrete references to the Who appear throughout he movie. Here are a few examples:

Short facts about the 1979 film Quadrophenia

The movie is set in London and Brightion in 1964, during a period when a lot of working-class youth in England identified as either mods or rockers, and sought out conflicts with each other.

Broadly speaking, the mods typically wore sharp suits, listen to pop and soul, rode scooters, and had a pechant for amphetamins. The rockers wore leather jackets, listened to 1950s rock´n roll, and prefered to ride powerful British motorcycles such as BSA and Triumph.

Jimmy Cooper, the film´s main character, is an adolescent mod (played by Phil Daniels) raised by working-class parents in London. He is not on good terms with his family and he detests his boring job as a post room boy at an advertising firm. Instead of working, he wants to party, enjoy amphetamines, ride his Lambretta scooter, and fight rockers – preferably with his mod friends Dave (Mark Wingett), Chalky (Philip Davis) and Spider (Gary Shail). 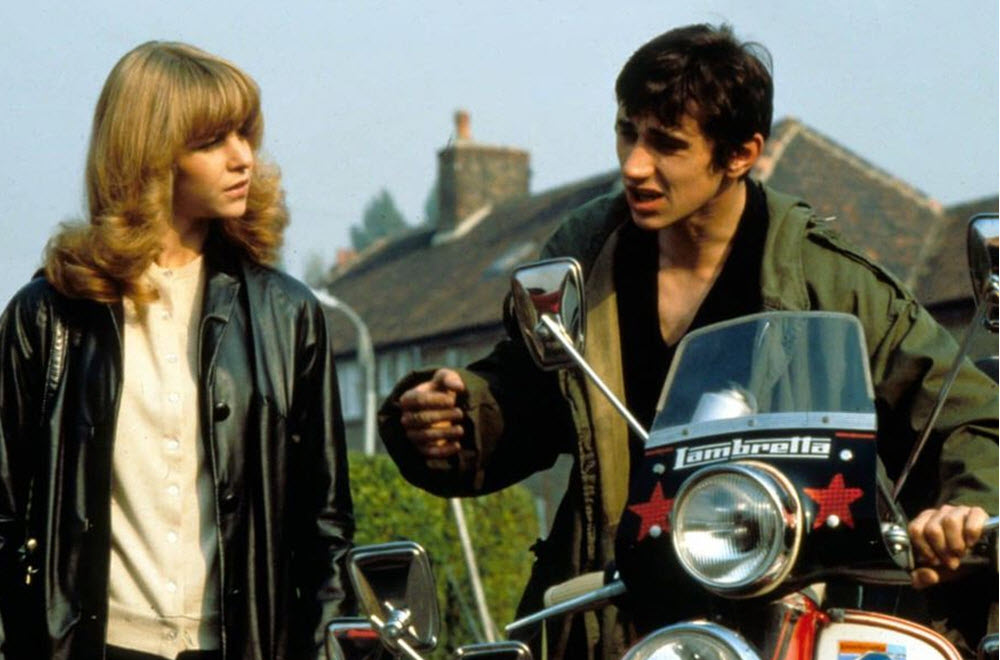 Jimmy Cooper and his scooter

In the film, rockers attack Spider, which leads to a revenge attack on the rocker Kevin (Ray Winstone), who also happens to be a childhood friend of Jimmy. After realising they are attacking his own childhood friend, Jimmy stops participating in the revenge fight and bereates the other attackers. Instead of stayign around in an attempt to stop the fight, Jimmy then leaves the scene on his scooter.

For the upcoming bank holiday weekend, both mods and rockers decide to travel to the seaside town Brighton. Jimmy hints to his crush Steph (Leslie Ash) that he would like her to ride to Brighton with him, but she instead choses to ride with the older and more prosperous mod Peter (Garry Cooper).

After being sold fake drugs by the London gangster Harry North (John Bindon), the mod friends vandalises North´s car in retaliation before robbing a pharmacay and getting their hands on a large quantiy of of pills.

At a dance in Brighton, Peter starts flirting with a pretty foreign girl, neglecting Steph. Jimmy suggests that he will help Steph dance with the flamboyant mod Ace Face (played by Sting),

but once they are on the dancefloor he ushers her away and dances on alone. When Steph goes to dance with Ace Face, Jimmy dances on the balcony-edge for attention, which earns him much applause but also annoys Ace Face. After diving into the audience, Jimmy is kicked out of the dance by the bouncers. When Peter leaves with the foreign girl, Jimmy attempts to get Steph to spend the night with him, but she has arranged to stay with a female friend.

The mod lads spends the night outdoors, before taking a long morning walk along the Brighton promenade. Riots brakes out, but Jimmy manages to escape the police down an alleyway together with Steph and they have sex.

When Jimmy and Steph returns, they end up in the aftermath of the riot and Jimmy is arrested together with Ace Face. When fined £75 (equivalent to £1,600 in 2020), Ace Face mocks the magistrate (John Phillips) by offering to pay on the spot.

Jimmy returns to London and falls into a deep depression. After finding his amphetamine pills, his mother throws him out. Jimmy quits his jobs, spends his severance package on more amphetamine, and learns that Steph is now in a relationship with his mod friend Dave. Jimmy briefly fights Dave, Steph confirms her disinterest in Jimmy, and Jimmy´s cherished scooter is destroyed in an accidental crash.

Jimmy returns to Brighton by train, taking increasing amounts of amphetamine pills. He revisits the riot scene and the place where he had sex with Steph, before learning that Ace Face – who he admires – has a menial job as a bellboy at a hotel.

Disillusioned with life and with the amphetamine pills wreaking havoc with his mental state, Jimmy steals Ace Face´s Vespa scooter and drives to Beachy Head, where he rides close to the cliff-edge. The scooter is seen crashing over the cliff-top, which is where the film begins with Jimmy walking back against a sunset backdrop.

The sundtrack album for the movie is also called Quadrophenia. The album contains 10 of the 17 tracks from the original 1973 album, but the mixes are not the same as on the 1973 album. For the soundtrack, John Entwistle remixed the ten tracks in 1979.

The soundtrack also includes three tracks by the Who that are not on the 1973 album: “Four Faces “, “Get Out and Stay Out” and “Joker James”.

Quadrophenia was released on DVD in 1999 by Universal Pictures Home Entertainment, with an 8-minute montage featurette. This release of Quadrophenia was based on the VHS print, and was therefore fairly low in quality.

In the United States, Rhino Home Video released a special edition DVD set in 2001 which included a remastered letterboxed wide screen transfer, a commentary, several interviews, galleries, and a quiz. Regretably, it was a shorter cut of the film, with several minutes of footage missing.

In 2006, Universal released a Region 2 two-disc special edition of Quadrophenia. This time, the movie was digitally remastered and the complete, longer version of the film was used. This special edition includes new commentary by Franc Roddam, Phil Daniels and Leslie Ash. On Disc 2, you´ll find an hour-long documentary andfeaturette where Roddam talks about the different locations.

In 2012, the Criterion Collection released a special edition version of Quadrophenia on both DVD and Blu-ray.